Not to be confused with Awards, Honors also provide recognition for members. Whereas Awards are earned, Honors are bestowed for service without the recipient’s knowledge. Honors are conferred upon recommendation by the Advisory Council and approval of the Executive Officer. Honors cannot be applied for.

All Honors Nominations are Due March 1st of each year. 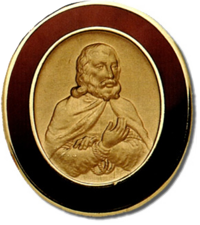 The Degree of Chevalier is the highest honor that an Active DeMolay can receive. This honor also may be granted to a Senior DeMolay. The Degree is a citation for outstanding and marked DeMolay Activity and labor. DeMolay International may confer the Degree of Chevalier upon a member of the Order or a Senior DeMolay who has performed unusual and meritorious service in behalf of the Order, who has attained the age of seventeen years as of the first day of the annual meeting of the year nominated and has been a member in good standing for at least two years on that date. An Executive Officer may lower the age eligibility requirement to sixteen.

The degree cannot be applied for, and the nomination is made without the knowledge of the DeMolay to be honored. The unanimous vote of DeMolay International at its regular Session is required to elect a nominee.

When the members of Advisory Councils meet throughout DeMolay to discuss recommendations for the Degree of Chevalier, it is vital that each Advisory Council have a clear understanding of its responsibilities in making the proper selections so that this coveted Honor maintains its quality and prestige in DeMolay.

The establishment of the Chevalier Degree was based on a need to recognize those DeMolays who have given service to the organization in an outstanding manner and “above and beyond the call of duty.” To simply award the Chevalier Degree to a Past Master Councilor who did a good job while he was in office, is contrary to the intent of the honor and defeats the purpose of the degree; and eventually it will destroy the meaning of it within your chapter. Indeed, the Past Master Councilor Meritorious Service Award was designed for Past Master Councilors who did a good job while in office.

Here are some good guidelines to consider when recommending an individual for Chevalier:

Using these basic guidelines, you should be able to determine if these nominees really measure up to the meaning of this Honor. The Chevalier Degree is given annually to approximately 1% of the DeMolay membership, and it is your responsibility to be certain that the future holders of the Honor are qualified in every way. With your cooperation, the Degree of Chevalier will continue to be held in high esteem.

An Advisor who wears the Cross of Honor has received a distinctive honor that can only be given by DeMolay International to a member of an Advisory Council or a personal representative of an Executive Officer. DeMolay International may confer the DeMolay Cross of Honor upon a present or past member of an Advisory Council or upon any personal representative of any Executive Officer who has served at least three years in either or both capacities and whose service has been conspicuously meritorious.

The Legion of Honor is the highest honor conferred by DeMolay International. DeMolay International may confer the DeMolay Legion of Honor upon a Senior DeMolay, who has attained the age of twenty-five years as of the first day of the annual meeting of the year nominated, for outstanding leadership in some field of endeavor, or for success in fraternal life, including adult service to the Order. No one may apply for this distinction, and a nominee, or the membership of a Chapter, must have no knowledge of the recommendation by the Advisory Council. Failure to observe secrecy in making this nomination subjects the nominee to penalty of not being considered.

DeMolay International may confer the DeMolay Honorary Legion of Honor upon a Mason who is not a Senior DeMolay, who has attained the age of thirty years as of the first day of the annual meeting of the year nominated, and who has performed unusual and meritorious service in behalf of the Order or who has evidenced a spirit of cooperation and appreciation for the Order. It shall not be given only for service on an Advisory Council.