John W. Bates University is sponsored by Col. James "Nick" Rowe Priory as an educational program for the DeMolays, Advisors, Sweethearts, and all members and guests to our DeMolay family. Courses have been designed and taught by Active Sir Knights, Advisors, and Sweethearts. The University awards degrees based on credits attained from attending courses, as well as taking and passing examinations. Credits can also be attained from taking additional DeMolay training, applying for awards, independent study, and leadership conferences.

The mission of the John W. Bates University of DeMolay Knowledge is to provide a program of voluntary educational experiences to the active DeMolays and Advisory Council of the Jurisdiction of Florida. To this end, the University shall develop and offer classes and other "events" of an educational nature on DeMolay and non-DeMolay material. The non-DeMolay material would be designed to help improve the students in their "all-around development" as inculcated by the Representative DeMolay program.

Courses are designed to be taught within a hour long period, including an optional ending examination. Courses include multimedia content and interactive activities as often as possible to engage all groups. Courses are designed from confirmed sources and often use personal experiences from the instructors. Courses often also include discussions with the audience to incorporate as many viewpoints as possible.

The University will schedule these classes on a regular basis at summer and mini conclave. Additional classes will be held at the request of the State Master Councilor, his staff and or Deputies, the Illustrious Knight Commander, or his deputies, Executive Officer, State Staff, or Chapter Advisors. In addition to traditional classes, the University shall utilize "knowledge games", independent study options, and guest speakers on topics appropriate to the mission of the University. 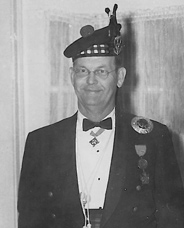 John Welch Bates was born to Mortimer Boulware Bates and Claire Munroe on July 21st, 1920 in Quincy, Florida. He was a member of Washington Lodge #2, and was very active in Freemasonry and DeMolay. He accepted the job of Chapter Dad of Angus Hinson Chapter in 1950, but only "until someone more qualified could be found." He served as State Chapter Dad for 26 consecutive years under multiple Executive Officers of multiple Jurisdictions. During this time he was awarded the Cross of Honor, Honorary Legion of Honor, Advisor's Honor Key, and the Florida Knighthood Grand Cross of Honor. Dad Bates was an exceptional man who seemed to have a mental record on every DeMolay Florida. He knew you and called you by name, even if you didn't think he had any reason to know you. You always felt he had his eyes on you, even when he was not present.

Education was always very important to Dad Bates. He attended and graduated from Emory University, where he majored in Modern Languages and Literature. He was fluent in seven languages, and could read and write in several others. Dad Bates was a wealthy man and shared his wealth without flaunting. He was known to finance a number of under-privileged youth through college, whether DeMolays or not. It was common for Dad Bates to extend a hearty handshake to a young man after his high school graduation and leave a folded up $500 bill in his hand. He expected his State Officers to know their DeMolay history and had a "20 questions" game he played with all new State Officers. This 20 questions game lives on in the form of the current J.B.U. "Star Chamber".

Dad Bates strongly promoted the Representative DeMolay program in Florida, which He viewed as an exercise in self discovery and self-eduction. He presented the RD medallion, (which was sold by ISC, then and now) to every new Florida RD as his own personal gift and recognition of the outstanding achievement, with the understanding that he had better never find you NOT wearing it, in appropriate circumstances and dress occasions. Dad Bates is one of the few winners of the very exclusive "Albert P. Wiese Award" given on rare occasions by the Central Florida Court of Chevaliers. Its requirement is a lifetime of service as a "Lover of DeMolay", which was what Dad Wiese styled himself.

The jurisdiction of Florida had an operating educational program since 1928 when it was founded by Dad (and Judge) Albert P. Weise, however, the program was un-named and not formally organized. When Dad Bates died in 1976, the Executive Officer at the time Larry Hunt, a friend of Dad Bates, wanted a way to honor his friend and Brother. Because Dad Bates was such a believer in education, the State Staff made the obvious connection and the John Bates University of DeMolay Knowledge was instituted, under the first Dean, Dad Gene Amsden.