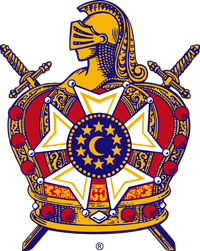 Every part of the Official DeMolay Emblem has it’s particular significance to the members of the Order of DeMolay.

Originally, Ten Pearls adorned the outer edge of our emblem to honor our founder and the nine youths whose ties of friendship drew them together in the formation of the Order. When, as comes to every man, the final summons for each one of this honored group, a red ruby takes the place of a pearl.

The Helmet is emblematic of Chivalry, without which there can be no fineness of character.

The Crescent is a sign of secrecy and constantly reminds DeMolays of the duty to never reveal the secrets of their Order or to betray the confidence of a friend.

The Five Armed White Cross symbolizes the purity of intention to always remember the motto of the Order...”No DeMolay shall fail as a citizen, as a leader or as a Man.”

The Crossed Swords denote justice, fortitude and mercy. They symbolize the unceasing warfare of DeMolay against arrogance, despotism and intolerance.

The Stars surrounding the crescent are symbolic of hope and should always remind us of those obligations, and duties which one brother of the Order owes to another.

The Emblem through the years: