The Order of Knighthood is an appendant organization of older DeMolays who are between 16 and 21 years of age; and are organized into a subordinate unit known as a Priory, with its own officers and ritual.

Colonel James Nicholas "Nick" Rowe, a DeMolay of M.P. James Chapter in McAllen, Texas, and the Priory's namesake, was one of only thirty-four American prisoners of war to escape captivity during the Vietnam War.

The main functions of a Priory are to:

About Col. James Nicholas "Nick" Rowe - Namesake for the Priory 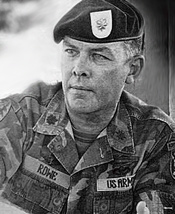 The DeMolay Florida Knighthood Priory is named in memory of Colonel James “Nick” Rowe who, while on active duty as Ground Forces Director for the US Military Advisory Group, Philippines, was shot and killed on 21 April 1989. The naming of Florida’s State Priory represents an expression of appreciation and respect for his contributions to the Special Forces Community, his nation, and DeMolay.

Nick Rowe was born in McAllen, Texas, 8 February 1938. He graduated from McAllen High School in 1956. He was an active DeMolay during his school years. He entered the United States Military Academy at West Point, graduating in 1960 with a second lieutenant’s commission in the Field Artillery. During the next three years, he completed the Field Artillery Officer’s Basic Course, Airborne School, Ranger School, Chinese Mandarin School, and served with the 7th Special Forces group (Airborne).

In July 1963, Lt. Rowe deployed to South Viet Nam. On 29 October 1963, while with Special Forces Operational Detachment Alpha-23, he was captured in a fire fight with the Viet Cong. Kept in confinement for five years, Lt. Rowe remained faithful to his God, country, DeMolay ideals and the Special Forces. Marked for death, he escaped on the eve of his execution.

Returning to active duty, Maj. Rowe served with the Defense Intelligence Agency until his resignation in 1974. Recalled to active duty in 1981, Lt. Col. Rowe returned to Fort Bragg where he created the Survival, Evasion, Resistance, Escape (SERE) Course. He later commanded the 1st Special Warfare Training Battalion (Airborne) until his assignment to the Philippines.

First Ladies of the Priory

Knights of the Order of the Cross of Jerusalem

The following Knighthood members have received this Award of Distinction: