THE AUTHIOR OF OUR RITUAL 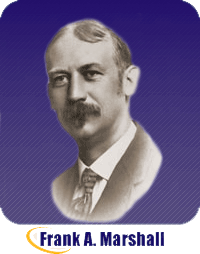 The beautiful ritual of DeMolay was written by Frank A. Marshall of Kansas City, Missouri and the circumstances surrounding the writing of this marvelous work are very interesting, especially to those who have seen the exemplification of the Ritual. Brother Marshall is one of those energetic, loyal and sincere members of the Fraternity, whom it is a pleasure to meet. He has been active in and received all of the official honors of both the York and Scottish Rite Bodies. Brother Marshall and his wife are frequent visitors in St. Louis, spending time while here with their daughter, Mrs. Mamie Ocker, High Priest of Sprig of Acacia Conclave, U.D., True Kindred, wife of Wor. Bro. Erwin L. Ocker, W.M. of Magnolia Lodge No. 626.

In his own words

The following history of the Ritual of DeMolay is in Brother Marshall's own words:

"I have often been asked, 'How did you happen to write the DeMolay ritual? The bare facts can be briefly stated. I wrote it because Frank S. Land asked me to do so and because Almighty God, whom I have thanked in my heart a thousand times, gave me the impulse to respond to the opportunity which the request involved."

"But behind the bare facts, there are others which might be of interest to the tens of thousands of DeMolays to whom my name means something less than nothing, and the Order and its ritual means everything."

"I knew Brother Land when—that is to say he was an earnest and devoted member of Ivanhoe Lodge No. 446 A.F. & A.M. of Kansas City, Junior Deacon in the line and the proprietor of a business far removed from either Masonic or DeMolay activities. I prized his friendship which was cemented by the associations formed when I did considerable ritualistic work in Ivanhoe."

"Soon after becoming acquainted with Brother Land, he gave up his private business to become secretary of the Scottish Rite employment and relief association. Our personal relations became close through association in the official line of DeMolai Council, Knights Kadosh in the Scottish Rite bodies of the Valley of Kansas City."

DeMolay is his Hero

"Let me say parenthetically that many years before I became a Freemason, Jacques DeMolay was one of my heroes. Forty years ago and more, I wrote a little private 'creed' in which I gave DeMolay a high place as an exemplar of loyalty to conscience."

"When, therefore, I became a member of DeMolai Council (it will be noted in passing that the name of the Consistory Body is spelled with an 'i' instead of 'y'), DeMolay appealed especially to my imagination. As a member of the line, while Brother Land was a commander, I became more and more closely drawn to DeMolay, perhaps unconsciously preparing for the work that was to come."

"Early in the summer of 1919, Brother Land invited me to write a ritual for the little club of boys whom he had drawn about him in the course of his work, which frequently brought him into contact with homes where the need of an uplifting influence was sharply defined. He explained in a general way, as well as in some detail, just what he had in mind and impressed upon me the dramatic instinct of the boy's nature which craved expression through a ritual. As I have previously suggested, I have thanked God a thousand times that Brother Land should have honored me with the invitation, but especially that He put it into my heart to feel the need and to try to meet it to the best of my ability. In a way, I was the logical selection for such a task, from Brother Land's standpoint, for I was one of the few newspaper men in the Scottish Rite bodies, though by no means the only writer. However, whatever the fitness of the situation, I was invited, accepted and wrote a ritual which none of us ever dreamed would be one of the rallying points for an army hundreds of American boys and lads in other lands."

"I had no sons of my own, though my home had been blessed with two dear girls. I had dreamed Ingersoll's beautiful dream of 'daughter's babes upon my knee,' and this wonderful dream has been beautifully realized as the years have gone by. I have two grandsons whom I pray I will live to see DeMolays."

"I have had many sweet moments in my life, but one of the greatest joys I have ever experienced was vouchsafed me when I read my first draft of the Opening and Closing and the Initiatory and DeMolay Degrees to Brother Land. The very spot where I read it has a sanctity for me. Brother Land sat at the secretary's desk in the auditorium of the Scottish Rite Temple at Fifteenth Street and Troost Avenue in Kansas City, and I sat on the step."

"It seemed to me that I could see the great vision which was to become a reality forming in Brother Land's mind as I unfolded the ritual to him as far as it had progressed. His remarkable genius for executive detail later enabled him to develop the floorwork and the splendid boys who exemplified the ritual breathed into it the breath of life which made my first witnessing of the degree work another of the landmarks in my life."

"The auditorium of the Scottish Rite in Kansas City will always be a shrine to me. It was here I took the vows of the Rite; at its altar I received a ring presented to me by the boys of the Mother Chapter and which is one of my most treasured possessions. At the altar, I saw for the first time, splendid young fellows take the vows of DeMolay and the Ritual was unfolded in a manner which was a prophecy of the future growth of which none of us really dreamed at first."

"Perhaps my greatest task in the beginning was to avoid Masonic phraseology, for in the pioneer days the fear of copying Masonry was a very real one and there was a very definite opposition to anything that suggested any connection with Masonry or that DeMolay should appear as a preparation for future Masons."

The Crown of Youth

"I confess that for weeks nothing outstanding came to me until the little inspiration of the Crown of Youth furnished the keys to the Initiatory Degree. From that time on, the ritual virtually wrote itself. The East as in the morning of life; the South as the station of manhood and the West with its solemn lessons were fairly obvious."

"From time to time, Brother Land suggested verbal changes and interpolations in the foundation sections of the ritual. He later called for a memorial service, which is my personal favorite. He called for an Institution Service for starting new chapters and then requested a Majority Service to bid farewell to DeMolays who became of age. Still later, he asked for a Funeral Service, apart from the Memorial and last of all for the Legion of Honor degree. To all of these demands, I responded with all I had in me, and such as it is, the ritual of DeMolay is my most reverent contribution to the welfare of the community, state and nation."

"My modest little home at 4506 Jefferson Street and especially the pine and great hedge trees in the front yard are sacred places to me because in my home and under those trees, the DeMolay ritual was forged on the anvil of my heart and soul during the summer months of 1919, as I found time from the exacting daily duties of my profession."

"Originally, I called the units 'Councils', instead of 'chapters,' but as I was a member of DeMolai Council, it was most logical to call the principal officers 'Councilors': symbolizing the advisory functions of leadership."

"Perhaps if we had dreamed of the future proportions of the Order of DeMolay, I would have been appalled at the task I undertook. However, I did what I could. I tried to plant a little acorn which I hoped might grow into a tree beneath which a few hundred or a few thousand boys would find the helpful shade of an inspiration to a better life. That it has grown into a great forest of shade is the great joy of my life and of Brother Land's and all others associated with the movement in early and later days."

"I have also thanked Almighty God a thousand times that he brought to the aid of DeMolay in its beginning days, the great brain—the great heart and soul and the wonderful influence of the late illustrious Brother Alexander G. Cochran of St. Louis, Sovereign Grand Inspector General of the Scottish Rite for Missouri and Grand Master Councilor of the Order of DeMolay."

"At a time when even indifference in high quarters, for any reason, would have meant oblivion for DeMolay, he was fired by the vision of Brother Land and his kind words of commendation for my own efforts have been among the most precious memories of my association with the Order."

"As it occurs to me in this random and rambling fashion, the foregoing is the answer to the question, "How did you happen to write the DeMolay Ritual?"